We find an unbelievable number of scorpions in the Lowveld, this summer we have had to relocate close to 30 from our office to the bush across the road. We have found a variety of species, some of them harmless and others quite dangerous. When we find them, we always catch them with a pair of rubber tongs and a bucket, very easy and no danger at all, a far better option than killing them as they play a very important role in the ecosystems they inhabit.

Scorpions have been on Earth for about 400 million years and can be found on all the continents apart from Antarctica, that is pretty amazing and shows that they certainly have a role to play or they would never have survived so long. Scorpions feed on a huge variety of insects as well as spiders, other scorpions and lizards some may even catch small mice. Without the scorpions we could potentially see huge increase in insects which could in turn cause huge loss in vegetation due to overfeeding. We need the scary looking scorpions to manage the number of insects and they do that job very well thanks to their impressive weapons. 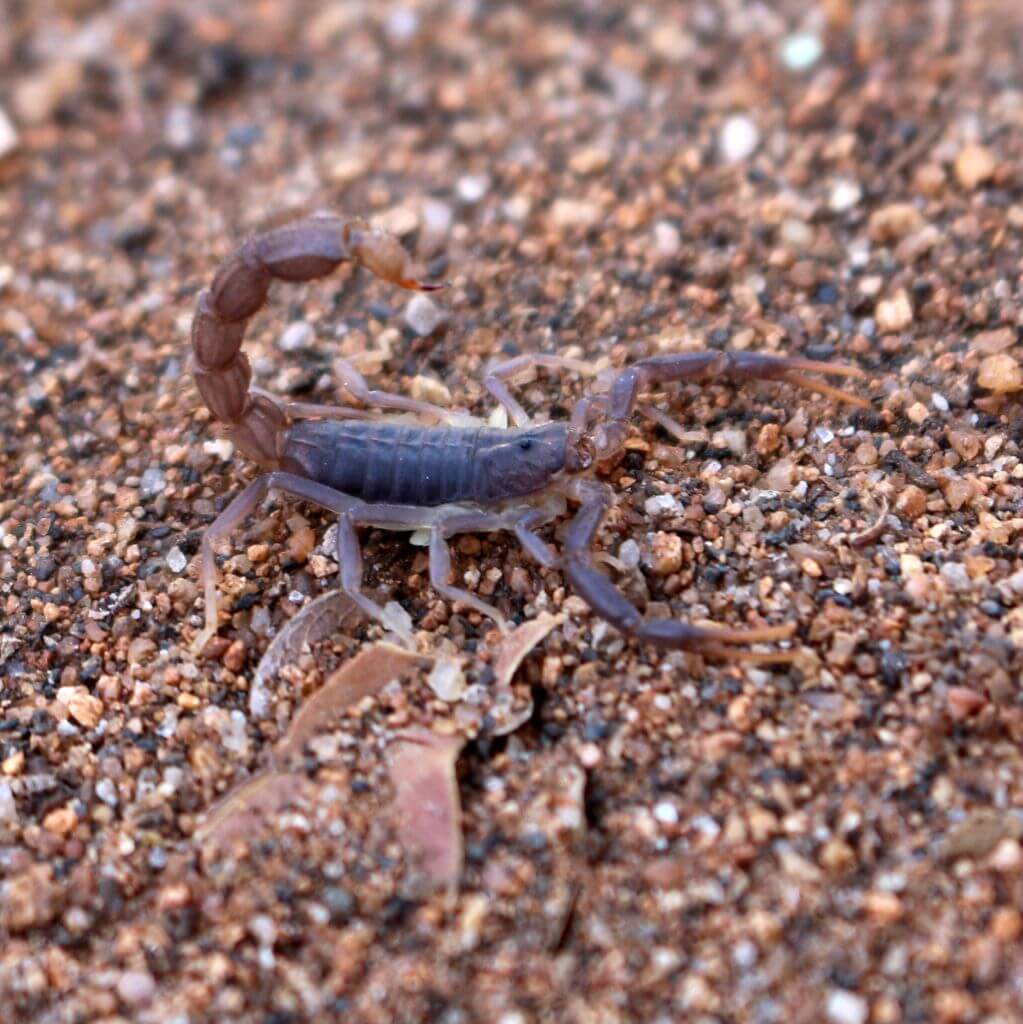 Scorpions are also a very important source of protein for a huge variety of animals. There are many bird species that prey on scorpions but the Rollers and Hornbills may be their biggest nemesis. I have seen many Lilac Breasted Rollers launch themselves upon scorpions that are seen crossing the roads the roller then grabs the scorpion by the tail and whips it against a branch until the tail is separated from the body, then the bird gulps the unfortunate scorpion done in one go.

Mongoose also enjoy a good scorpion as a meal and are often be seen digging under rocks and into the ground in search of the stinging arachnids. Scorpions spend the day time hiding in coin slot shaped tunnels under the ground, under rocks, under the bark of trees and various other hiding spots. They have to avoid being spotted by the huge amount of scorpion hunters that wait for them to make a wrong move. Often when I am busy working in the garden the yellow billed and red billed hornbills will sit in the tree above me watching me move rocks or rake the leaves as soon as they spot a scorpion they fly down and grab it in their banana shaped bills. The scorpion tries its best to sting the bill of the hornbill but it cannot and the hornbill quickly removes the tail and swallows the scorpion up before another hornbill swoops in and steals the tasty treat. 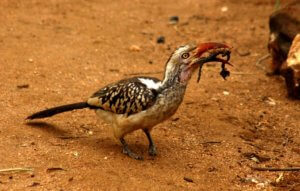 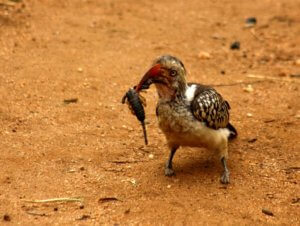 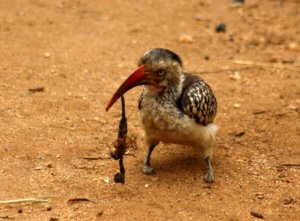 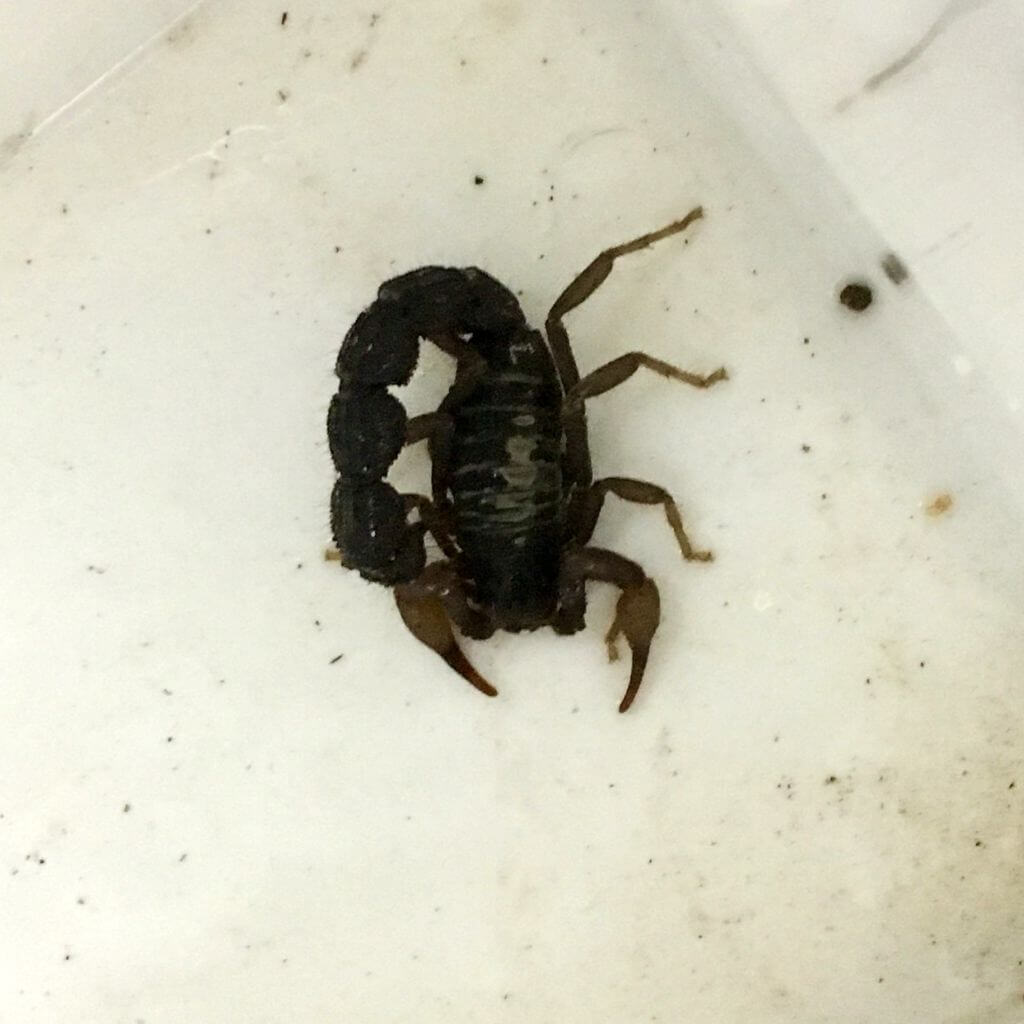 Scorpions are solitary and hunt at night, some venture out on hunting missions’ others lie near the entrance to their tunnel or cave waiting to ambush anything that moves close enough. They are more active on nights with no moon than nights around the full moon when they could be spotted easier by owls and other nocturnal predators. All scorpions have venom in their sting, it is a neuro toxic venom and is designed to immobilize their prey and in some instances the venom actually starts breaking down the prey for easier ingestion and digestion. Scorpions have another weapon, their pincers,  scorpions always have one weapon that is more powerful than the other. It is very easy to see which of the weapons is the scorpion’s strength. If a scorpion has a thick tail and thin pincers it shows that the sting is the more powerful and prominent weapon, if the scorpion has large pincers and a thin tail it shows that the pincers are more powerful.

I have been stung twice by scorpions which shows how unlikely a person is to get stung by a scorpion as I never wear closed shoes day or night and I have been living in areas populated with scorpions for the last 14 years. Both times were on one of Wild Planets Private Kruger Safaris. The first time I accidentally stood on the scorpion so completely understandable to get stung, the second time was during dinner and my foot must have been in the way of the scorpion’s path. Both stings stung quite a bit the second sting was a thick tailed scorpion and was measurably more painful than the first sting, I can describe the pain as a feeling like someone is extinguishing a coal or cigarette on my foot. The pain was at 100% for only about an hour or 2 and then the pain dropped off fairly quickly, I could feel a slight stinging sensation the following morning and about 15 hours after the sting occurred the pain was pretty much gone. 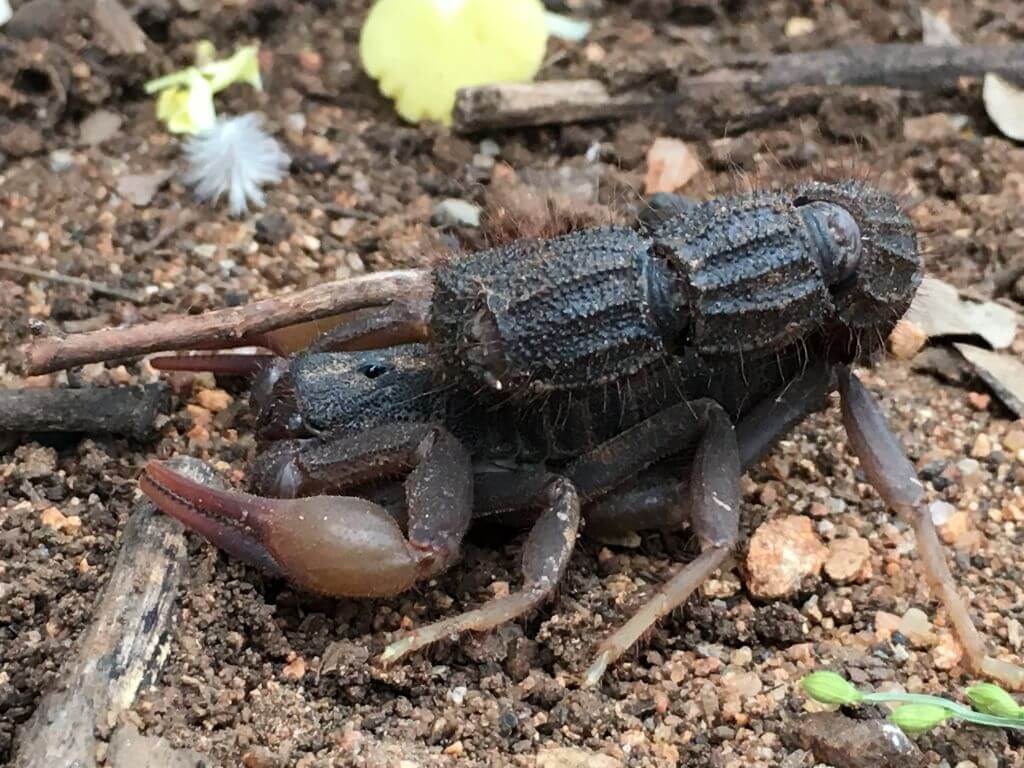 Scorpions have a fairly unique and complicated mating ritual, to start, when a male and female scorpion meet, they first exchange chemical scents to confirm they are the same species, once this matter has been sorted, they clasp pincers with each other and do a little dance side to side, almost like a Scorpion Waltz. The male then leads the female to a rough surface, usually a rock, the male then deposits a package of sperm on the rock and then guides the female over the top of the sperm package. The sperm then enters the females genital opening and fertilizes the eggs, not much contact during intercourse but pretty romantic fourplay with the dance. Scorpions then give birth to live young that are miniature replicas of the adults. The young stay with the female and actually lie all over her back and legs for up to 2 weeks before they leave her to start a life of their own. 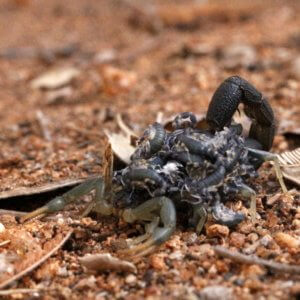 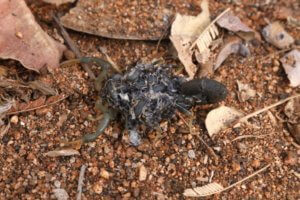 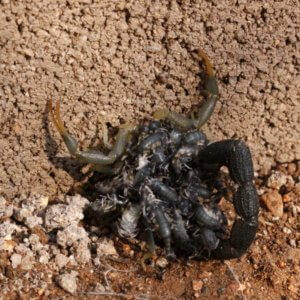 Scorpions shine a luminous green colour under a u.v. light, the reason for this is not know as yet but it is a spectacular feature. Once I was camping with a group at the Magadigadi Salt Pans, usually this is the perfect place for the guests to camp out on the pan without a tent, directly under the stars. On this particular tour a guest had brought a u.v. light, he brought the light out after dinner and shone it around the area where all the guests where going to sleep. The whole area was filled with these little scurrying green lights, to this day I have never seen a group of people set up tents as fast as they did that night.

Scorpions will always bring about fear in most people but the more we understand about their behaviour and their role in the ecosystem the more we begin to appreciate these fascinating 8 legged creatures. 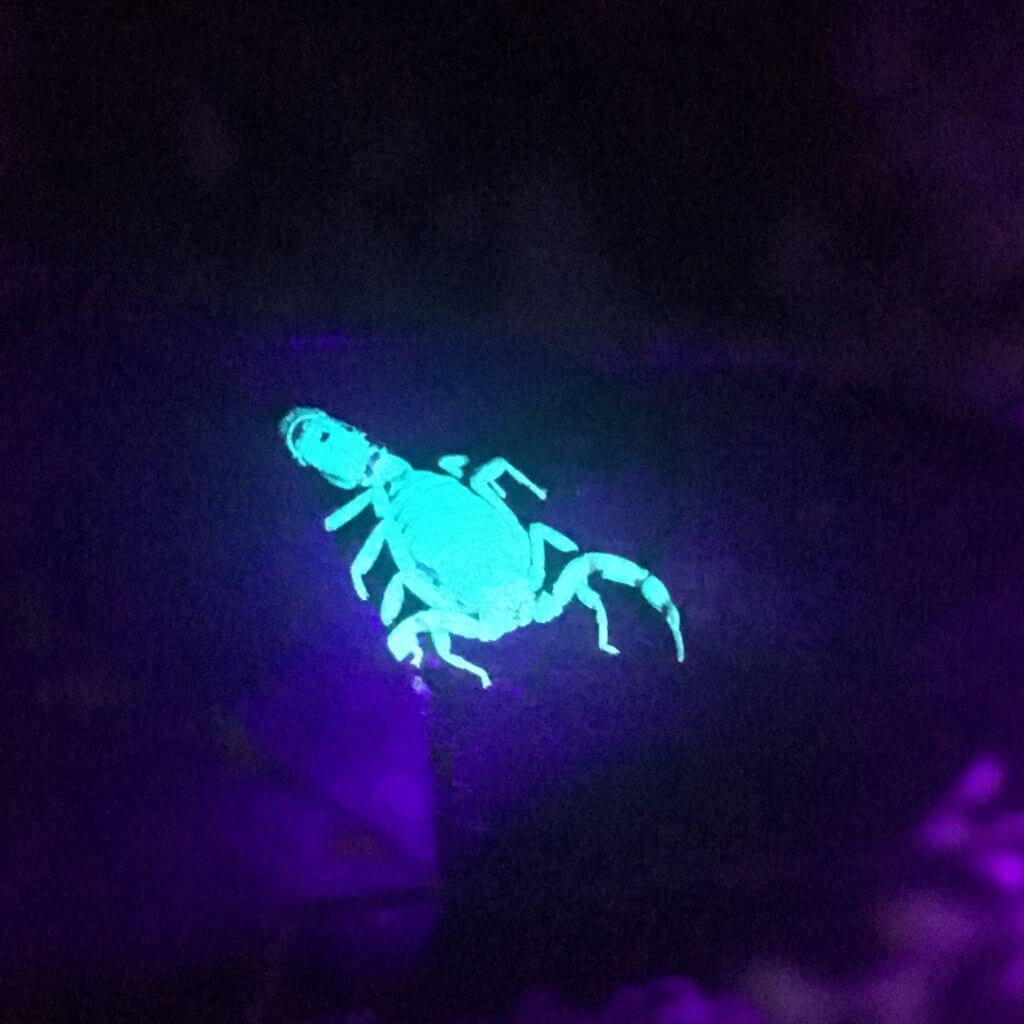